Assembly Announces Streamlined State Budget -  On April 6, 2020 the Assembly Budget Committee Chair, Assemblyman Phil Ting, released a memorandum announcing a decline in tax revenues with increased costs to deal with COVID-19.  He predicts many funding proposals may need to be set aside so the committee can focus on disaster response and economic recovery funding.

State and Feds Part Ways on Delta Water Operations - After decades of being in lock-step in coordinating permitting for the operations of the State Water Project (SWP) and Central Valley Project (CVP) pumps in Tracy, California has forged a new path with two recent actions.  For the first time, the CA Department of Fish and Wildlife (CDFA) issued a state Incidental Take Permit (ITP) for the operation of the SWP.  As is common in the Delta, lawsuits against the permits followed.

Solano County Strikes Deal on Cache Slough Restoration - As part of a settlement deal with DWR, the Solano County Board of Supervisors approved receiving $750,000 to develop of a Cache Slough Habitat Conservation Plan (HCP) in exchange for the county dropping a lawsuit over the state’s Lookout Slough tidal marsh restoration project.  The Sacramento Area Flood Control Agency and Solano County Water Agency are also contributing funding for development of the HCP.

​Consistency Certifications Filed for Delta Habitat Projects - The Delta Stewardship Council has revised the webpage dedicated to Covered Actions, which is the certification process for demonstrating consistency with the Delta Plan.  No changes were made to the regulatory policies or requirements for consistency certification.  On April 7, 2020, DWR submitted a certification of consistency with the Delta Plan for the Sherman Island Belly Wetland Restoration project and Westlands Water District filed certification for the Lower Yolo Ranch Restoration Project.  The Sherman Island project proposes maintaining water levels year-round on 1,000 acres to create wetlands to reverse subsidence and sequester atmospheric carbon dioxide to help reduce greenhouse gases (GHG). The Yolo Ranch project will convert 1,671 acres from agriculture to tidal habitat to comply with federal Biological Opinions for the coordinated operation of the SWP and CVP.
“No Regrets” Habitat Projects Proposed to Rejuvenate Voluntary Agreements - In an effort to advance the stalled Voluntary Agreements, the Northern California Water Association (NCWA) has joined forces with DWR and the CA Department of Fish and Wildlife (CDFA) to submit a list of what they consider early implementation “no regrets” salmon recovery projects to the CA Resources Agency, including up to 689 acres of enhanced floodplain habitat.  They are seeking $70 million from Prop. 68.
Antioch Settlement Agreement with DWR - In 1968, the City of Antioch executed a settlement agreement in which the CA Department of Water Resources (DWR) pays one-third of the costs of supplemental water needed when Delta water becomes too salty as a result of upstream State Water Project export diversions.  In mid-April, the City Council voted on approval of a new settlement agreement with DWR in which Antioch will receive $70 million in financing for construction of the Antioch Brackish Water Desalinization Plant.  The funding will include a direct payment of $27 million and additional $43 million in state grants and loans.
RTD Comments on Southern Delta Salinity Plan - Restore the Delta submitted comment letter on the State Resources Water Control Board's (SWRCB) Notice of Availability for a draft Comprehensive Operations Plan for the Southern Delta Salinity Objective prepared by DWR and USBR.

​Bureau Decreases Contractor Water Supplies - On April 1st, DWR conducted the fourth manual snow survey, recording a 43.5 inch snow depth which is 66% of average for April at this location.  Pursuant to the resulting water supply forecast, the U.S. Bureau of Reclamation announced Sacramento River and San Joaquin River Settlement Contractors and the San Joaquin River Exchange Contractors will receive 75% of their contract total.  Wildlife refuges will receive 75% of their Level 2 water supplies.
Record of Decision Approved on Long-Term Water Transfers - The U.S. Bureau of Reclamation signed a Record of Decision authorizing a long-term water transfer program.
Quarter of Delta Acreage Targeted for Conversion to Carbon Sink - The Delta Conservancy is nearing completion of third-party verification of managed wetlands for carbon emission reduction credits under the Delta Carbon Program.  According to Conservancy Executive Director, Campbell Ingram, the land conversion idea has a target of 200,000 acres transitioning to managed wetlands or rice production – which is more than one quarter of the Delta.  He believes the answer to reversing subsidence and carbon emissions lies in reverting part of the Delta to its former marshy environment.  About 50,000 acres in this area are publicly owned, providing an opportunity to demonstrate the viability of carbon farming the neighboring lands in private ownership.

New Delta Lead Scientist Selected - The Delta Stewardship Council announced the appointment of Dr. Laurel Larson as the new Lead Scientist, who is responsible for overseeing the Delta Science Program.

NDWA Comments on Coordinated Ops of CVP/SWP - The Agency submitted letter commenting on Draft EIR/EIS analyzing the long-term coordinated operation of the CVP and SWP to maximize water exports and implement recent amendments to the Coordinated Operations Agreement (COA).

​NDWA Comments on Delta Habitat  Projects -  Scoping comments were submitted by NDWA on a habitat restoration in Lookout Slough and on water supply project for the long-term operation of the State Water Project (SWP) including recent amendments to the Coordinated Operations Agreement with U.S. Bureau of Reclamation's Central Valley Project (CVP).

WaterFix Project Documents Rescinded - DWR and USBR withdrew the change of diversion petition and CEQA certification for WaterFix twin tunnels project in order to initiate planning of a single tunnel project diversion and conveyance project. On July 15, 2019, NDWA filed a Request for Dismissal and the court entered the dismissal as requested.

New Agreement on Operation of SWP/CVP Signed - DWR and the U.S. Bureau of Reclamation signed a new amended version of the Coordinated Operations Agreement (COA) for the State Water Project and Central Valley Project originally adopted in 1986.  At the February NDWA board meeting, MBK Engineers gave a presentation explaining the changes agreed to by DWR and USBR.

Water Board Developing Water Rights Enforcement Policy - Pursuant to recent legislative directive (Water Code Section 1825), the State Water Resources Control Board has initiated scoping process for development of regulations to govern the enforcement of the terms and conditions  of water rights permits, licenses, certifications, and registrations to appropriate water, to enforce state board orders, and to prevent the unlawful diversion of water. On a related note, a video of January workshop provides information on water diversion measurement requirements.

Water Board Adopts New Flow Standards for San Joaquin River - At its December 12th meeting the State Water Resources Control Board approved a resolution adopting amendments to the Bay-Delta Plan update that establish new flow standards for the San Joaquin River and tributaries, including CEQA Overriding Considerations and Monitoring Program.  DWR and the CA Department of Fish and Wildife made presentation to the water board regarding their efforts to facilitate voluntary agreements with stakeholder on improving flows for fisheries consistent with the State’s Water Action Plan. Negotiations for voluntary settlement agreements to replace the flow standards will continue, but some agencies have threatened to file lawsuits.
Delta Pact Between State and Federal Agencies​ - In mid-December, DWR and the U.S. Bureau of Reclamation announced execution of new agreements governing the coordinated operations of the State Water Project (SWP) and Central Valley Project (CVP).  They are intended to resolve conflicts over amendments to the Bay-Delta Water Quality Control Plan (D-1641) and to revise water sharing formulas.  These changes are an Addendum to the original Coordinated Operating Agreement (COA) executed in 1986 and authorized by Congress, commonly referred to as the “historic” Delta Accordintended to ensure Southern California urban water supplies during drought and clear the way for increased water shipments from the north, while guaranteeing more outflow to the San Francisco Bay to please environmental organizations.  They redefine the role the federal CVP has in providing water to protect the Delta water quality when river levels are the lowest during the summer and fall months.  Another agreement formalizes the cost-sharing formula for projects needed to comply with Endangered Species Act responsibilities (BiOps) for the joint operation of CVP and SWP, and new facilities such as WaterFix intakes and tunnels.  An additional “No Harm Agreement” revealed in public records act request has also been negotiated in regards to the WaterFix Project with a companion “Letter of Dismissal” for protests of WaterFix petition to be dropped.  The City of Stockton and San Joaquin County criticized these backroom negotiations to keep the WaterFix twin tunnels mega-project moving forward.

DWR Retreats on WaterFix Consistency Appeals - After DSC staff report finding that insufficient evidence provided to support DWR's consistency determinations and presentations by appellants at a mid-November workshop, DSC Chair Randy Fiorini agreed consistency determination was premature and recommended DWR withdraw the certification for revision. On December 7th,  Director Nemeth sent a letter withdrawing the certification of the WaterFix project. The DSC Executive Director subsequently dismissed the nine appeals and lifted the ex parte restrictions, which allows DWR to have private discussions with Council members and staff on how to revise the project to be consistent with the Delta Plan before resubmitting certification.

​​​​Senior Water Rights Validated by Court - Senior water rights strengthened by a Santa Clara County Superior Court ruling that the State Water Resources Control Board does NOT have jurisdiction to enforce priority of water rights between pre-1914 and riparian water rights when issuing curtailment enforcement action to water users during drought conditions.  The case was in response to unlawful curtailment notices and a $5 million fine issued by the SWRCB against the Byron-Bethany Irrigation District (BBID) in 2015 and 2016. There are two remaining actions for the court to render decisions: 1) whether the SWRCB's enforcement action was a "taking" under the Constitution; and 2) reimbursement of BBID's legal costs associated with defending against SWRCB enforcement actions.

​Water Rights Permits and Change Petitions Explained - The chief of the permitting section for the Division of Water Rights gave a presentation to the CA Water Commission describing the complex steps and timelines involved in processing applications associated with the SWRCB's authority over post-1914 water rights.

​Trump Administration Propose Increasing Delta Exports - Pursuant to President Trump's directive, the U.S. Bureau of Reclamation has issued Notice of Intent for preparation of environmental document to authorize maximizing the amount of water exported from the Delta by the Central Valley Project (CVP) pumps. 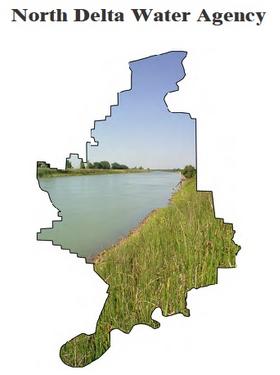 The California Legislature formed the North Delta Water Agency in 1973.  By law, the Agency has two general purposes:

1) Protect the North Delta's water supply against saltwater intrusion; and 2) Assure a dependable supply of water for North Delta landowners.